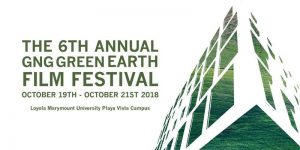 Celebrating its sixth year, the GNG Green Earth Film Festival is a place for filmmakers of all experience levels—from seasoned industry professionals to passionate students— to come together and share, screen and discuss their eco-conscious films with like-minded individuals. We believe in the power of film to start conversations and effect positive change in the environment. The GNG Green Earth Film Festival strives to uphold that idea through high-quality screenings, fascinating discussions with the filmmakers and meaningful partnerships with nonprofit organizations benefiting from the festival.

The GNG Green Earth Festival is made possible by The Gottlieb Native Garden, Loyola Marymount University's School of Film and Television and Loyola Marymount's Center for Urban Resilience.

The Founders of The GNG Green Earth Film Festival are Dan and Susan Gottlieb.

The GNG Green Earth Film Festival is made possible by Dan and Susan Gottlieb, owners of The G2 Gallery.

Born in Chicago, Dan Gottlieb grew up spending hours in the Field Museum of Natural History and the Chicago Museum of Science and Industry. He graduated from Boalt Hall Law School and then served for four years as a Los Angeles County Deputy District Attorney.

In 1976, Dan co-founded a real estate company that he ran for 40 years and just recently sold. During the 1990s, Dan served a six-year term on the Board of Directors of the U. S. Chamber of Commerce.
In his free time, Dan loves to take photographs, with a specific interest in the hummingbirds that live in his backyard.

When Susan Lenman Gottlieb was born, her family was living in a log cabin built by her Swedish immigrant father in the remote area of Quebec, Canada. After graduating from Mack Training School for Nurses in St. Catherines, Ontario, Susan worked for many years in California as a registered nurse.

Although the Gottliebs have had a lifelong interest in nature and the environment, Susan became actively involved in the 1980s when she began the restoration of her garden by removing most of the exotic plants and replacing them with California native plants. The Gottlieb Native Garden is now designated by the National Wildlife Federation as an official Backyard Wildlife Habitat and a Xerces Society Designated Pollinator Habitat. It is often included as a stop on LA’s prestigious garden tours and offers a wonderful look at many varieties of California natives.

Susan is currently on the President's Council of National Wildlife Federation, the Boards of Directors of the Friends of Ballona Wetlands and Audubon California, and is a supporter of many environmental organizations including Earthjustice, Conservation International and The Theodore Payne Foundation among others.

The GNG Green Earth Film Festival awards four prizes. Three are selected by the Jurors. The only prize the Jurors do not award is Audience Choice.

This prize recognizes an outstanding film dedicated to informing the audience about a critical environmental issue affecting a local community or the world.

This award recognizes a feature film with exceptional storytelling, representing all the directing, writing, editing and more that went into film production.

This award recognizes a short film with exceptional storytelling, representing all the directing, writing, editing and more that went into film production.

The audience is encouraged to select their favorite overall film. Each guest is given a ballot and may select only one film, either feature or short. The results are tallied after the final film screenings.

The CURes / SFTV Student Award for most "Eye Opening" Film is presented to the filmmaker whose entry best informs the audience of an environmental issue that has escaped the limelight...until now.

The Gottlieb Native Garden is a flourishing California native plant ecosystem located just a couple of miles from Rodeo Drive in the heart of Beverly Hills. The garden’s ecosystem is home to more than 200 hand-selected native plant species and nearly 400 documented wildlife species. It has the special distinction of being both a National Wildlife Federation certified Backyard Wildlife Habitat and a Xerces Society designated Pollinator Habitat.

The Center for Urban Resilience (CURes) is dedicated to serving urban communities with a suite of research, education, restorative justice and urban planning programs designed to improve quality of life for residents, especially for those in underserved neighborhoods. CURes uses urban ecology to empower communities to build resilient, vibrant, and just cities through meaningful interactions with their diverse ecosystems. In particular, CURes emphasizes linking LMU and its partners to neighborhoods that have been historically underserved. The Center’s work fosters the philosophy of environmental justice – local communities making local decisions. CURes believes this is the most effective process for creating resilient cities. Some of CURes general community services include operating Ballona Discovery Park, leading a suite of school science programs and advancing research projects focused on transforming the urban ecosystems around us.

Movie industry moguls helped establish Loyola Marymount University's (LMU) current campus on the bluffs above west Los Angeles in the 1920s. By 1964, LMU was formally teaching film and television curriculum, and in 2001, the School of Film and Television (SFTV) was established as its own entity. Today, SFTV, one of the country’s top-ranked film schools, offers students a comprehensive education where mastering technical skills and story is equally important to educating the whole person, including the formation of character and values, meaning and purpose. SFTV offers undergraduate degrees in animation, production, screenwriting and recording arts; minors in film and television studies, animation and screenwriting; and graduate degrees in production, screenwriting, and writing and producing for television. Selected LMU alumni include Francis Lawrence, Melissa Blake, Brian Helgeland, Effie Brown, Barbara Broccoli, James Wong, Jack Orman, John Bailey, Bob Beemer, Francie Calfo, Lauren Montgomery and Van Partible, among others.

Finalists will be announced on September 10th, 2018.

All finalists will be screened at the Gottlieb Native Garden Green Earth Film Festival at Loyola Marymount University's Playa Vista Campus from October 19-21, 2018. Every film screened will be eligible to win an award.

All finalists will be screened at the Gottlieb Native Garden Green Earth Film Festival at Loyola Marymount University's Playa Vista Campus from October 19-21, 2018. Every film screened will be eligible to win an award.

Check back soon for our festival schedule!